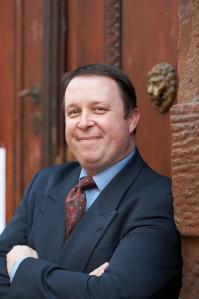 Michael Rainey, 51, is the founder and Managing Partner of GRN Czech. It’s been 10 years since the company was established. Today Michael will tell us a little bit how he ended up in (then) Czechoslovakia from California, USA, and even more challenging, started a business here during those quite difficult times of the early 90s.

Dear Michael – you’re an American, who has been living and working in Czechoslovakia/Czech Republic since 1991. What brought you to Europe just after the end of the communist period?

I came here on a holiday and after being here for 2 weeks, I was so taken by not only the beauty of the city, but the wonderful energy there was all around.  People were so positive, everything was alive & buzzing, and most apparent there was opportunity all around.

What were the main obstacles and the main opportunities in the CEE (Central & Eastern European) region in the 1990s?

The main obstacles that I readily remember were the lack of services and goods, and most important the red tape and bureaucracy to get almost anything done.  Being a foreigner, not speaking Czech – this all added up, made for a tough challenge.  But as to the main opportunities —- where ever you looked there was the opportunity to do “something” that just wasn’t here. Along with a friend, we decided that there was a gap in meeting the HR needs of the many foreign companies then beginning to enter the market. So began the launch of my first recruitment group.

What did you do before GRN Czech was founded in 2003?

As I mentioned before, in 1991 I co-founded the recruitment group Personnel Select.  My partner and I took that from our first office here in Prague, to 11 offices in 8 countries – focused on the CEE region.  We sold this in 1996 to a multi-national recruitment group that was looking for a foothold in the CEE Region, which Personnel Select gave them.  For 3 years I then worked for V.C.C. as the V.P. for European Operations.  Finally in 1999 I came back to the Recruitment business, purchasing a small recruitment group here in Prague that eventually was merged into GRN Czech from 2003.

GRN Czech is “a boutique executive search and recruitment firm specializing in Mid to Executive level searches” as we can read on GRN’s LinkedIn introduction. How has the company developed during its 10-years journey?

When we started GRN Czech, as it is today, our main task and goal was to not be just one of the many tired, run-of-the-mill recruitment agencies, churning out lists from their “databases”.  Instead it was our view that we needed to address the exact needs of the client — to really get the best candidates in the market for any given assignment.  And in order to deliver on that, we knew that running advertisements would not bring those people in — rather we had to go out and directly identify and attract them.  Additionally we also knew that we had to be a partner to anyone of these candidates that we were approaching — whether or not the role we approached them about was a fit for them at that time or not; we knew that we were building a quiet but efficient network.  These candidates know that we are there when they were ready for their next step, knowing that they can also count on us to advise them accurately and fairly regarding their career future.

So for the past 10 years, we have developed down that path, partnering with the professionals we work with on both sides of the ”fence” so to speak.  Our clients and our candidates know that we are only here to make the right fit, never forcing nor wanting either side to be let down. So we are happy being a “boutique” search firm, quietly and efficiently helping our clients; being there when they need the best advice and service.

That’s where GRN Czech is today and it seems to have a bright future ahead of it. In the second part of Michael’s interview we will hear more about the exciting field of headhunting itself.